What Our Customers Say about us?

Alex is very professional in his work. Don’t turn around the bushes, straight to the point. Well done.

Thank you Donvin for helping us along the way and continually answering our queries. We really like the car alot and appreciate you for helping us to get the best price.

After reviewing a car we want which raises a lot of question on me regarding the process so we decided to went down to AML to enquire. From then we saw Tim Chan, the first thing I told him was I want a pleasant transaction. Tim handled everything professionally with his excellent transparent service. How you can say no to their awesome package and service. I highly recommend Tim Chan, please visit him to experience an awesome and pleasant service.

Thanks Donvin for your fast response and help with my loans despite the difficulties. Process was such a breeze and great salesperson. Paperworks explained in detail and easy to understand. From day 1 to collection of car, including COE bidding is updated in real time and hassle free. Thanks Donvin & M9.

I have been cheated when buying car! I don’t trust car dealers but Alex has changed my mindset totally. Everything was so transparent! Honest, helpful, very responsive, very hardworking. I can’t thank him enough for realising my dream of owning my own car. I truly recommend his service to those out there feeling lost in search of a trustworthy dealer! Im not being exaggerating, but it’s only the truth! I’m impressed to witness his service beyond my expectation!! Thank You Alex! 5 ⭐⭐⭐⭐⭐ and beyond!

I made a quick decision to buy Honda fit from M9 Derrick after discussing with him about the overall package which is very comprehensive. The purchase procedure was quick and smooth. Bought the car at correct timing of coe, collected the car after 2 weeks and car so far so good.

When I decided to give up of owning a PI car after so much negative comments from friends, (the most concern is after sales services) till I met Tim. He is so persistent when I don’t even reply his text messages, but still updated me the lastest COE results and pricing. He make sure I get my needs and requirements throughout the whole sales. After my visited of their service centre, saw a team of good reliable and experienced mechanics and now I can rest assured about my doubts. Well done! 👍

Thanks Alex for all your efforts with the bids and assistance. Our initial visit was minutes to closing on CNY week but he promptly threw on his shirt and let us in which led to the eventual sale. While Alex may be new-ish in the company do give him a chance to prove his dedication.

I was desperately looking around for a new car in a very short notice. All the other companies and even agent showroom told me it’s impossible collect my car in the stated period. When I almost gave up , Tim came into the picture and offered me ready stocks new vehicle with choices of 5 colours! He even promised me car delivery in 3 weeks time. Being very genuine, Tim even bought me to M9’s warehouse to see all the car stocks. I was so impressed with their stock holdings for a local PI company! M9 price is also very competitive in fact cheaper but their freebies is much more comprehensive than the others. I definitely can trust my friends and relative to Tim, after such a positive purchasing experience. He is so far the best, friendly, not pushy and professional car sales specialist I’ve met over the years!

A BIG shout out to Tim from M9, for assisting to deliver the car so quickly and smoothly. In our first meeting, Tim ensures that all fees and charges were made transparent and was very patient when I question each and every amount item. With “VAC ready stock”, that means we can physically view the vehicle that we were purchasing. After signing the agreement, he has never failed to provide constant updates, advice and assurance throughout the whole end-to-end journey, this gives us alot assurance and confident dealing with him. Thank you for your exemplary professionism, diligence and patience with us. Keep up the good work!

I had a pleasure to work with Derrick. This is my first time buy PI car, to keep my less worried. Derrick bring me to see On Hand Car Stock although is his after office hour. He promised me car delivered two days before my birthday. Thank you for the Exceptional Service!

M9 offers a more attractive package compared to some other car dealers. Was attended by Tim Chan, a cheerful, bubbly and charming person. He is always there to answer any queries. The whole process was efficient and smooth sailing.

Buying car is difficult. I’m an operation guy with many errands to handles, but after served by Donvin, his knowledges and services impressed me. Donvin really put in extra miles on assisting me to get my documents ready before hand and planned accordingly without failing. When come to collection day, my car ready in tip top condition, he make sure everything that I’ve requested are installed properly and brief me accordingly. Thumb up for his humble, honest and definitely trustable, will come back to you for next purchase.

I have worries and concern and have heard terrible story about PI, price gimmick. But when I come to M9 International I totally have a 100% peace of mind I will like to specially thanks to my professional, patient and very price transparent sales consultant, Tim Chan and his excellent service provided with warranty from their professional workshop, competitive price with their attractive bidding package and M9 friendly environment. I have made my choice right. Thanks to Tim and M9 team!

Thinking of buying a car? I would highly recommended anyone to this man for his patience,dedicated and most importantly honest and dare to go an extra mile to meet his clients satisfaction. It’s my 1st time purchasing a car from M9. Although some hiccups here and there, Mr Tim come to the rescued. Now i’m the owner of this Nisan Qashqai. Once again Mr Tim. Thank you very much. He use to call me Abang Juffrey.

M9 international provided us with a wonderful car buying experience. The guys at M9 were nothing short of professionalism and I could not fault them in any way. Unlike the other car dealers we went previously, there were no hard selling and I liked how everything presented to me were transparent. On the day of collection, car was in a perfect condition, no hidden fees and very friendly service. I would especially like to thank Donvin whom I was first greeted and welcomed by. He isn’t just another car dealer, he really care about his potential customer. I have heard of many horror stories about things going wrong and unhelpful car dealers but to my pleasant surprise I was treated with courtesy and respect in M9. The entire sale process was fuss free. It took only 1 working day to settle my finance and COE Bidding, and less than 2 weeks to collect our new car. I would definitely recommend Donvin. Read more

The whole process of purchasing a new car was pleasant (Definition: giving a sense of happy satisfaction or enjoyment) from the start to the delivery. We did not have to worry about anything as Derrick kept us informed and handled everything promptly and efficiently. After sales service is excellent. We are blessed and thankful we can now enjoy our new ride with no bitter memories. Come and experience it for yourself!

We had a very good experience with Tim. He is very prompt in his response to all our queries. His team are all very helpful and friendly. It is also very good that they provide servicing at their own service center. Tim was also very accommodating to attend to all our additional requirements. Thumbs up! 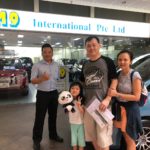 Don is always responsive whenever we have queries about the car and loan. He was willing to take the extra mile and followed up with our requests efficiently. He is hardworking and was prompt to send us updates about our new car as well as facilitated a smooth purchase experience for us. We are happy to have him serve us and we look forward to having him serve us again soon!

He is still responding to my queries and messages even when he is overseas! That’s after 3 weeks of buying a Noah from him. Talking about after sales service, his is tip top! My impression of Donvin hasn’t changed since the first time I walked into M9 International. I remember it was already 6pm when my family walked into M9, and were approached by a very ernest, honest, and sincere Donvin. He answered all our questions to the best of his knowledge and didn’t rush us into a decision even though by the time we made the deal, it was past 9pm. The subsequent follow ups were also impressive. He would text me and take pictures of the car to update me about the progress. Additional add ons that i subsequently requested for were also promptly arranged.In less than 2 weeks, everything was sorted out, arranged nicely, and i became the proud owner of a Noah Hybrid, all thanks to Donvin and the M9 team!

M9 International Pte Ltd was set up in 2007, dealing with brand new cars and offering customers a wide range of Japanese makes and models such as Toyota and Honda. A second pre-owned car unit was opened in view of our expansion to add-on a wider range of Continental and Japanese cars. The company has since specialized in major continental and Japanese brands and developed a dedicated team of sales specialists with product knowledge in this field.

To be the most reliable car dealer in Singapore that provides one-stop solution for your vehicles.

Never fail to deliver and provide services rendered, to all our customers.

KNOW MORE ON OUR EXCITING PROMOTION

WE GOT YOU COVERED!!!

The best time to own your dream car is now!!